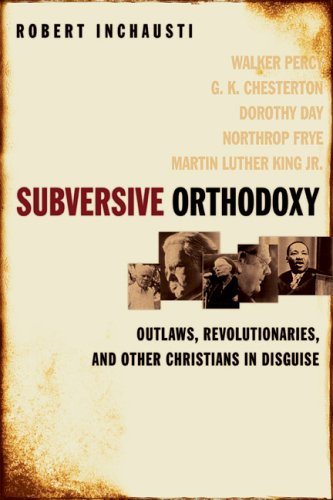 Outlaws, Revolutionaries, and other Christians in Disguise (Brazos Press 2005) Robert Inchausti explores the ideas of a number of literary figures whose thinking has been shaped in one way or another by Christian assumptions. He chooses these authors that he refers to as savvy Christian humanists because they share a suspicion of worldly power, while actively seeking a more just world. The postmodern turn has fostered a perspective that politicizes thought so that we are constantly at work trying to unmask the power moves that others are making. The authors discussed in this book favour the “depoliticizing” of thought. For them all human thought needs to be assessedthrough the grid of “an eschatological perspective on human existence”. Blake, Goethe, Kierkegaard, Chesterton, Dostoyevsky, Solzhenitsyn, Jack Kerouac, Walker Percy, Dorothy Day, Thomas Merton, Wendell Berry, Marshall McLuhan, Jacques Ellul and a number of others are discussed in this insightful book. These are members of what Inchausti calls the “prophetic tradition”.

What they hold in common is their dissatisfaction with modernity. But, “each … does far more than simply say no to modernism, they bridge the chasm between our longings for spiritual completion and the technoscientific world in which we live” (p13). Unlike many who profess Christian faith they are less concerned with certainty and more concerned with discerning a transformational revelation, They are the “subversives” articulating insights drawn from a Christian understanding of the world and setting forth prophetic alternatives to the status quo of modernity.

These are not theologians but literary figures steeped in the Christian tradition whose writing opens the way for fresh understanding. There is much to be gained from this book and from the writings of those the author engages.