I walked to the end of Dundurn Street,
to the quiet hind of a busy road,
where the bus loops. I walked
to the foot of the escarpment and looked
up, way, way up, at all those stairs.
And though they are wooden stairs
that make a nice wooden sound, and though
they lean endearingly to one side or the other
in a manner steel could never comprehend,
there are still two hundred and forty-six of them,
and before I was even halfway to the top
my legs had begun to feel lead-filled,
and the next step seemed a millennium away,
which, after all, it was, in a way, since here

I was, scaling the rocky old face

her sandstone, siltstone, shale, dolomite skin,
terra mama, and all those labour-intensive layers
of her make-up, so that when I reached the top
I had to sit and catch my breath, and there
down below, was our little city, lying
spread out on its beach of glacial rubble,
sunning itself on a completely other
geological time, and I thought, well,
here I am, three hundred and fifty million years
from home.
God! but it’s been a while
since the foundation of the earth.
ALL THAT TIME!
and no one to talk to.
I was alone, sitting on the brow
of the Niagara Escarpment, and except
for the constant swell and surge of cars
coming up Beckett’s Drive to Garth Street,
or going down, it might have been peaceful.
I tried to concentrate on Lake Iroquois,
or Algonquin, whichever prehistoric pond it was
that lapped and bashed against this wall, but
the sun had set, and stars were beginning
to tinkle in the sky like wind chimes,
and a million lights were coming to life,
car lights, street lights, porch lights,
bicycle lights, night lights, and people
in their dim homes were moving
room to room, switching lights,
so the whole lovely view
flickered, all the time,
like lively little tongues, like
the lively little tongues of lovers
in the flame of affection,
and I thought
this is like Pentecost, kind of.

How is it we can barely talk to each other anymore?
Three hundred and fifty million years is nothing.
We’re at least that far apart, sitting across
the same room. Switch the light. Is it
just me? Or where on this hardened planet
is there a hope our mutually exclusive, accrued
believings of the truth will break down, soften,
and flow together in the heat of some unimaginable
quaternary change? Or do we grow old this way,
waiting till the common weather finally erodes
these bloody unforgiving rocks
into a willing roundness?
There’s nothing much
to say—and it gets so tiring, climbing
the endless staircase of our wooden
chit chat
chit chit chat
chit …
If only the window would blow open once,
and the conversation catch, like fire, so that
we’re both, we’re all consumed, and the room
isn’t big enough anymore, and we take
to the street, and talk and talk,
and the languages we’ve learned to cultivate
exhaust themselves, so we have to dig deeper
and break out other mother tongues,
and get a bit drunk, spilling words
we never said before, didn’t know
we knew, and we couldn’t tell how long
we’d gone till people stopped
on their way to work, wondering, “What the … ?”
but then they’d join in too—because
it was contagious, it changed the face
of the earth, and these three hundred
and fifty million years
were like …
over.
But here,
today,
the words we use,
they fly, they arc
and dive through air, land
where we don’t look, won’t dare.
I pick up another, palm it, a stone
chip off the top of this cliff,
thinking
I should bring it back home.
Put it on the table between us.
Show you. Show me.
How hard it is.
How long it’s taken to get here. 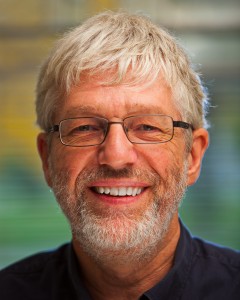