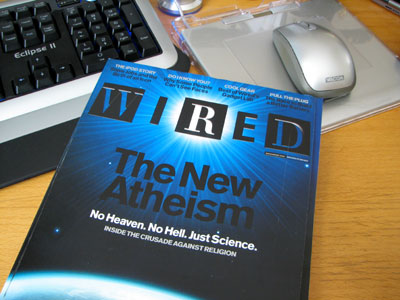 The November 2006 issue of Wired magazine carried a cover story under the title, The New Atheism: No Heaven. No Hell. Just Science. Columnist Gary Wolf begins his article with these words … “My friends, I must ask you an important question today: Where do you stand on God? It is a question you may prefer not to be asked, but I’m afraid I have no choice. We find ourselves this very autumn, three and a half centuries after the intellectual martyrdom of Galileo, caught up in a struggle of ultimate importance … it is time to declare our position.” The authors discussed are Richard Dawkins, The God Delusion, Sam Harris, Letter to a Christian Nation, and Daniel Dennett, Breaking the Spell.

These authors advocate not only that religion is wrong in its beliefs but that it is evil and should be eliminated from the cultural landscape. It could be argued that these writers who have provided us with thoughtful engaging writing in the past have become embittered. The strident and exclusive character of these books put one in mind of the very fundamentalisms that upset them.

One wonders what these authors would have to say about the arts. Are they too incompatible with science? NOTE:The quarrel In a little essay titled, Creative Mind, Dorothy L. Sayers observed

“The quarrel between the sciences and the humanities” (including religion and the arts) “is chiefly a quarrel of words. And when I say that, I do not mean to suggest that it is a quarrel about nothing. Both parties are setting out to explore reality, each by by its own method. But they have only one set of tools between them. And because they use these tools very differently – because they cannot agree about the nature and purpose of the tools – the account which they present to the world as a result … are apt to appear mutually unintelligible and violently antagonisic.” – Christian Letters to a Post- Christian World

One thought on “Wired: The New Atheism”