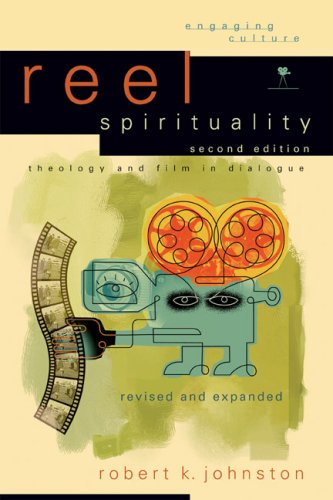 There have been many books on movies and religion in recent years, but for the most part, each has been written from a fairly limited perspective. To cite just a few examples, Michael Medved and Margaret Miles have tackled the subject with very different cultural agendas, biblical scholar Robert Jewett has allowed film to illuminate his understanding of Pauline theology, and Philip Yancey relied on a series of films on the life of Christ while writing his popular book about Jesus. But there has been little, if any, interaction between these authors, and even less interaction with the larger world of academic film criticism.

Robert Johnston, professor of culture and theology at Fuller Theological Seminary, aims to fill that gap with Reel Spirituality, which draws all these other books together and addresses their social, cultural, theological, devotional, and artistic concerns in a single, comprehensive volume. Johnston is certainly familiar with the literature, and in his own contribution to this genre, he outlines several ways in which Christians can respond to films, balancing the narrative and aesthetic demands of the medium with the need to place films within a larger theological context.

Johnston says the church has responded to film in five main ways over the years, from avoidance, when film was just a cheap, worldly entertainment associated with the lower classes at the turn of the century, to caution, dialogue, appropriation and, finally, divine encounter.

If Christians,especially those of a Protestant persuasion, tend to avoid any serious engagement with film or similar aspects of popular culture, Johnston says it is because we have been overly suspicious of images, preferring the abstractions of the rational word instead, and because we have tended to emphasize redemption theology to the exclusion of creation theology. But Johnston says Christians are increasingly willing to hear the voice of the Holy Spirit as it speaks to us through film, and to allow movies to transform our lives. Films have the power to open our minds to a sense of wonder, and they can help us to re-discover what it means to live within a narrative.

One can quibble with Johnston over his interpretations of particular films, and his regular use of diagrams can seem a little dry at times, but he consistently points his readers back to the experience of watching films themselves. His book will hopefully play an important part in helping Christians to relate to their culture, each other, and God.