The idea of narrative has in recent years found its way into contemporary conversations whether in the classroom or around the dinner table. We are always on the lookout for what will help us to order our lives. In our western culture reason has played this role for some time. The ability of reason to link things together such as events, ideas or cause and effect, is a valuable exercise to be sure. What is more difficult to get at however is underlying meaning.

It is here that narrative comes to the rescue as it becomes a resource for meaning. Narrative does not replace reason, but serves as a compliment to it. Narrative is more organic, reason more mechanical. Story is a central component of the writing arts such as plays, novels and scripts for film. But the 20th century saw some effort to challenge the dominant role of narrative. Some feared that story could serve as a social soporific where society would doze off and become unaware of the reality that surrounded them. Authors like Bertolt Brecht wished to destroy the power of fictional narrative and were concerned to encourage thinking about the story rather than entering into the story. Despite the nay-sayers current attention to narrative is to be welcomed – but not without qualification.

“It is a narrative of a vulnerable God – who has come to humanity as human and in all of the frailty of an infant in order to invite us into a story bigger than anything we can construct for ourselves”. 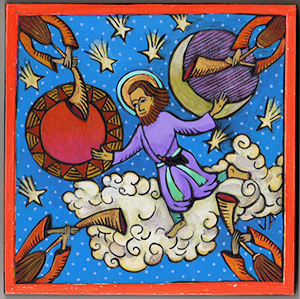 Those of us within a faith tradition readily recognize the importance of story for communicating our tradition. Nonetheless from a faith perspective there are two ways in which the current interest in narrative may come up short. First is the tendency to let our own constructions serve as reality. Here we are likely to forget the past and to live under the illusion that we alone shape the world. (i.e. our community or culture) The second risk is that under the downpour of stories found in media, politics, and the excesses of a consumer culture, the faith story gets washed away, or at the very least watered down.

One of the values of following the Christian calendar is the ongoing reminder of the story in which we are called to situate ourselves. In that story we soon discern the importance of acknowledging the divine initiative. Humanity is on the receiving end. We do not determine our own destiny nor are we architects of our own salvation.

This is not to say we have no influence in the time-bound matters of life, but only that whatever we may do is finally only part of a much larger story. Advent and Christmas centre on a story of divine initiative. “The Word became flesh and dwelt among us”. This is not a story conjured up by human ingenuity, it is a record of the divine breaking into history with a narrative that will provide clues to the underlying meaning of the bits and pieces of history and of our lives.

It is a narrative of a vulnerable God – who has come to humanity as human and in all of the frailty of an infant in order to invite us into a story bigger than anything we can construct for ourselves. The second risk is that we would lose the story which we call the evangel. Many a myth is there for the taking, as they cross the silver screen, visit us in our living room, seduce us through the media or are found on the shelves of our libraries and bookstores. (By myth I mean truth bearing stories by which we are guided.)

Moreover the biblical story can be morphed into entertainment or be swamped by personal experiences or the rhetoric of the end times. Advent is a brief time in which we live in expectation. But this mood of expectation is not to be a passing disposition but a permanent feature of Christian living. Our’s is a faith pregnant with the promise of newness – we are new creations looking in anticipation for the day when all things will be made new.

We can easily exchange the radical evangel for a more comfortable domesticated version which suits the world we live in – or is it – the world we have constructed. There is something here for the artist as well. Artistry that is exercised in the context of faith is never to be simply – self expression. It always involves a gesture toward a bigger narrative than one’s personal story. Art is always indebted to what is given – to what is already present – to the divine initiative.

The artist draws upon what is given in the world both for inspiration and for the means of carrying out the artistry. Art plays off gift and is to a degree shaped by that gift. And what about preserving the story? What can the artist do about that? I have no wish to advocate for the necessity of explicit faith content in the work of artists for whom religious faith is important. However it does seem right to say that all work done by such artists will have within it some thread of that bigger narrative which is to be the light in which all of life is viewed. I would also like to think that the arts bring to us not only the wonders of the natural order, the splendor of ordinary life, and the truth of human glory and wretchedness, but will in important ways offer a prophetic voice amidst the chorus of options common in our culture.

If we take the biblical narrative seriously we must grant that making over the world is not ultimately in our hands. That babe of Bethlehem is also the One who followed a path of vulnerability and by what appeared to be weakness overcame the powers and now promises to make all things new. Advent is a brief time in which we live in expectation. But this mood of expectation is not to be a passing disposition but a permanent feature of Christian living.

Our’s is a faith pregnant with the promise of newness – we are new creations looking in anticipation for the day when all things will be made new. As we come to the final days of another year memory does its work. It has been another good year for Imago. Links with artists have extended the growing network of Christians in the arts across this country. Public events, one on one meetings with artists, and the planning and preparation for initiatives ahead have made it a busy year. As some projects have come to completion new projects have taken their place.

The energy evident among artists and those who favour the arts in Canada holds good promise for the future. It also makes clear that Imago is engaged in important work and is having a growing influence in Canada.