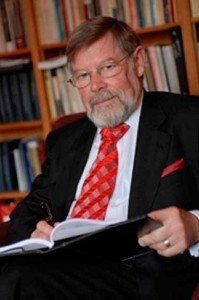 It has been forty years since the issuing of the charter of Imago, on November 1, 1972. The water that first flowed under that bridge has long reached lake and ocean, but the stream is still flowing. Who was there? What were they thinking? The charter document lists five original directors. Wilber Sutherland was described as a ‘home missionary’. The other four were Bill Mason, filmmaker perhaps best known for ‘Paddle to the Sea’ (died in 1988); Gordon McKye, high school teacher (died in 2009); Harry Robinson, priest (died in 2011); and myself, Paul Gooch, faculty member in philosophy at the Scarborough campus of the University of Toronto.

Why did they join in this venture? The answer is Wilber himself. He had been the writer for Bill Mason’s film “Wilderness Treasure”, and the two shared not only their faith but also their love of camping and the outdoors. Harry was priest at Little Trinity Anglican Church in east Toronto, and had a long involvement with Inter-Varsity Christian Fellowship, of which Wilber had been the director. Gordon likewise supported IVCF and also attended Grad Camp, another of Wilber’s initiatives in bringing faith and reason, commitment and openness,
into dialogue. As an undergraduate I had met Wilber and invited him to the newly formed IVCF chapter at Bishop’s University; when I returned to Toronto for graduate work I deepened my connection with him in ventures such as the Graduate Christian Fellowship and the journal CRUX.

Wilber was the point of intersection, then, for each of us. But why Imago? I think we all recognized a unique set of gifts in Wilber centred in a passion for bringing together grace and gospel with truth to be found in
unexpected places in the whole of God’s world. Wilber had an abiding interest in the creative arts as sources of insight and provocation, not so much as didactic tools, as occasions rather for the Spirit’s stirrings.
For many of us, he opened up new vistas, encouraging an intelligent faith that engages with creation rather than seeing the ‘world’ as an unholy partner with flesh and devil. But for others, Wilber was unsettling and problematic. He resigned from IVCF in 1969 (some of the story is to be found in Part Two, Chapter 5 of John G Stackhouse Jr, Canadian Evangelicalism in the Twentieth Century).

With a continued  sense of Christian vocation but no obvious positions to apply for among the organizations he knew, Wilber set about creating a new entity. He called it Imago, seeing the image of God especially in creative artists. The original directors shared that vision, largely because Wilber himself embodied that image so profoundly.

Among the central purposes of Imago were three related especially to Wilber’s own life story and commitments:

It’s my guess that the original directors saw themselves as supporting Wilber Sutherland in his personal quest and his ministry to those in Christian communities hungry for the freedom and acceptance he exemplified so faithfully. That forty years on his vision and work continues is tribute to him, and to
those he inspired.