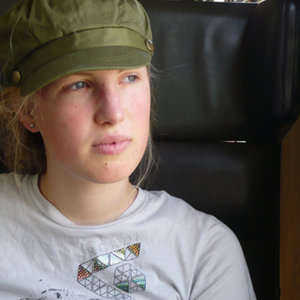 One of the ways the church is striving to re-integrate the practice of the visual arts into their communities is by inviting artists to create works in response to, and as a part of weekly worship services. Recently at St. George the Martyr, an Anglican church located in downtown Toronto, theology student Sam Cavanagh gave leadership to a liturgical arts project; a collaborative painting over three Sundays during the 2010 Advent season. Meghan Hers, an OCAD student and one of the collaborating artists, interviews Sam about her experience.

SC: I recently was involved in a youth mission project called the Go Project, where we lived in a church and engaged in outreach, discernment, worship and community. It was appealing to youth who were having a hard time verbalizing their faith journey… it spoke to people’s unraveling faith journey instead of it being a static thing. We set up a huge canvas and three people were painting at the same time, but it was reaction based, so if one person drew a line, then another person would add to that line, and so the art piece would emerge from the community of painters. I wanted something similar to happen within our community over Advent. For three weeks we had different artists come in and respond to what was happening in the liturgy and community, in prayer and in the Word, through image. Scripture readings and sermon details were provided to the artist beforehand. Some artists read these, others didn’t. The point was to mimic the idea of waiting that we experience during Advent, so the image was never complete until the week before Christmas, in the same way that we’re consistently waiting for the Incarnation during Advent

MH: How would you characterize liturgical art?

SC: I don’t know much about the history behind liturgical art, but I know that it speaks of how we can experience worship in a myriad of ways, and how the arts help us to open up our imaginations, experiencewonder and connect to the moment. Usually liturgical art is simply placed in the sanctuary, but what I wanted to do was create it during the time of worship, so that painting is not separated from prayer, or preaching, but is part of it and equally a means of connecting to God.

MH: What is this particular piece of liturgical art trying to achieve?

SC: I think it functions as a conversation starter. People who have come into the sanctuary and seen it, who weren’t present when it was created, are drawn to it. The reason for this is because it’s different, not cohesive, interesting, and wild and colorful. It has these embedded spiritual images in it and people want to engage with that, they want to know what it’s about. It’s a way to approach theological questions.

MH: Why did you choose to put the canvas and artist at the front of the sanctuary?

SC: I think having the art in progress right there meant that is was something that people could meditate on. When Simon was preaching beside you, I was splitting my attention between his words and then the painting, never leaving the words, always having them influence what I was seeing. If we had put the artist at the back of the congregation they would have fought with Simon for the congregation’s attention. I think that the point was that it was a piece shaped by the worship experience, which in turn could foster worship in others. I think that it’s something that’s holy, and that’s why I wanted to put it right at the front, beside the font especially.

MH: Art-making is so often an individual act, but I think that liturgical art may be able to redeem that sense of
isolation. John Witvliet, in the book For the Beauty of the Church, (David Taylor ed. Baker Books 2010) concurs, proclaiming that “the liturgical arts offer remarkable possibilities for realizing the fundamentally communal nature of the church and a Christian way of life… [and] expand our awareness and experience of the church as a functioning corporate body that transcends time and place.”