Janet Read has shown her work in public and commercial galleries including a recent large solo exhibit, with catalogue, titled ‘Ocean as Vessel’ at the Robert McLaughlin Gallery in Oshawa, Ontario. She also had a well-received duo exhibit at the Whitby Station Gallery titled, ‘Sublunary’ dealing with the elements of earth, air and fire. She has exhibited her work across Canada. 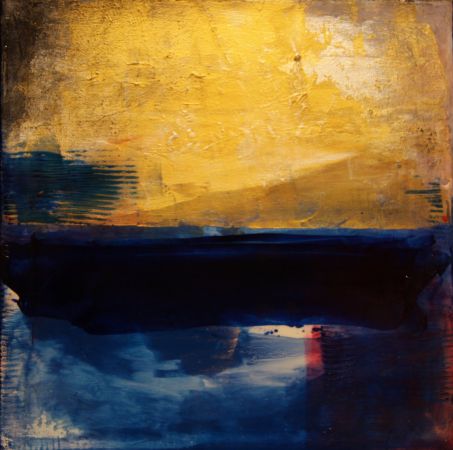 Residencies in Newfoundland with the Pouch Cove Foundation and in Ireland on the Dingle peninsula have informed her love of the fluid and metaphorical nature of the sea and water. Light over water and the emotional nuances of colour continue to fascinate her and inform her work. The play between light and water provides a fascinating context for the play between colours on canvas. Water is a changing medium, subject to many moods, provoking thoughts of transience and transcendence. Read’s work depicts the threshold between representation and abstraction, what appears and what is experienced. The rich overflow of colour in her work draws the eye and heart into the visual landscapes she paints.

“I pick up a brush and trace the
path of wind and water, pick up a
brush and aim towards the light.” – Janet Read

In addition to her painting she is a published author of a collection of poetry, Blue Mind’s Flower, shortlisted for the Gerald Lampert Award in 1992 as well as two juvenile historical novels. She has just completed a Master’s degree in Aesthetics on the work of metaphor in Paul Ricoeur and Maurice Merleau-Ponty.
www.janet-read.com