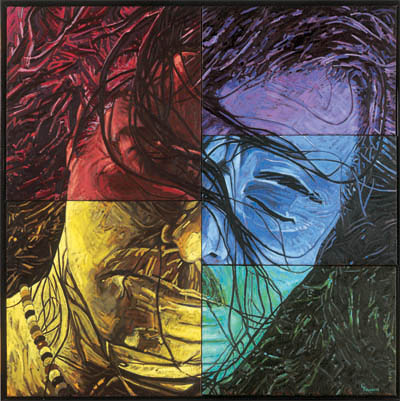 Since September 2008 Winnipeg visual artist Gerald Folkerts has been living with the diagnosis of terminal cancer. Some of you may remember that Gerald was the 3rd prize winner in Imago’s National Visual Art Competition in 2002. A couple of months ago I had the privilege of being part of a celebration of Gerald’s life and work. In December family and friends were doubtful that Gerald would make it to attend the end of January show. He was there for the opening and closing events and spoke on both occasions.

His Head over Heels paintings won the First Award in the annual juried exhibit of the Manitoba Society of Artists in 2006 (the sixth time he had won that award). This unfinished series provides not only insight into the characters he paints but also in the character of the artist. Calvin Seerveld notes that,

“Folkerts has the wisdom to let his Christian faith subtly percolate in the spirit of his painterly art by showing compassion for the problematic figures he treats.”

In speaking about this series the artist writes; “The homeless, the poor, the sick, the young, the age – the very ones whom we often tend to ignore, or at least overlook – their stories seemed worth telling. Such stories are often difficult to hear … Yet these are often the stories that need to be heard most desperately. … why not focus on the face and the feet? They might reveal a great deal about the journey of one’s life, the road on which one has travelled.”

The people found in these paintings are people that the artist took time to get to know. The subjects are burdened in one way or another but the artist depicts them possessing grace and dignity. These important human traits also characterized the artist. He has carried out his artistic calling, deeply shaped by his faith. His work is that of a truth-teller and in the midst of the difficulties of life his faith-ful artist’s eye discerns threads of hope. His work nurtures the human spirit and calls us to view the world and others in it through a lens of justice and compassion, seeing us all as bearers of the divine image.