His prints are represented internationally in both public and private collections. He is represented by the Abbozzo Gallery of Toronto, Ontario, and the Peter Buckland Gallery of Saint John, New Brunswick.

Steeves is Printmaking Technician/Lecturer in the Fine Arts Department at Mount Allison University, the recipient of prestigious awards including Elizabeth Greenshields Foundation and the New Brunswick Strathbutler Award for excellence in the arts, was elected to the Royal Canadian Academy of Arts in 2011, and was born in Riverview, New Brunswick.

Steeves received his Bachelor of Fine Arts from Mount Allison in 1981. 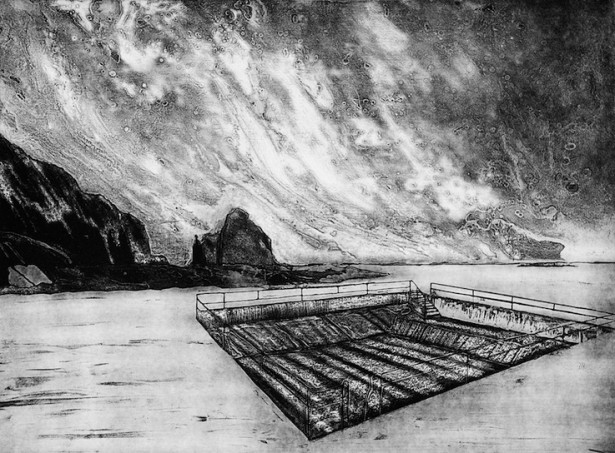 The Open Studio at 401 Richmond Street in Toronto – has been hosting an annual National Printmaking Awards event since 2008.   These are awards for excellence in printmaking that draws artists from across Canada as well as Canadians working elsewhere in the world.  The selection process was overseen by a distinguished jury of arts professionals.  The first prize winner of the 2014 Awards announced this in May was Dan Steeves.  Dan is a very accomplished printmaker whose work has shown in several countries around the world and is found in both public and private collections.   He is one of the artists represented by the Abbozzo Gallery in Toronto.  Dan lives in Sackville New Brunswick and teaches at Mount Allison University.  His art work is featured in a number of publications including the catalogue for the show The Memory of Pain and a small work of word and image The Light That Lives in the Darkness (2006) done along with Mark Harris.  All the publications are done by the exquisite Gaspereau Press.  Dan’s work is not only beautifully executed but conveys depth of emotion and sensitivity to the world around him.  You can discover more at http://www.dansteeves.com/