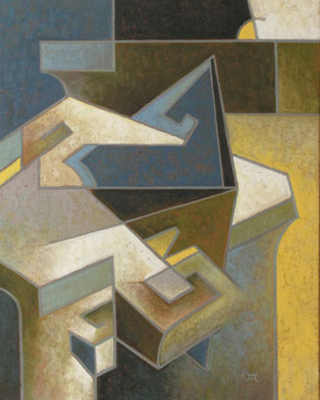 Robert Henri, the inspirational artist and teacher of the Arts Students League, New York, spoke to an experience which has been part of my journey; “There seem to be moments of revelation, moments when we see in the transition of one part to another the unification of the whole. We may call it a passage into another dimension than our ordinary” (The Art Spirit, 1923) Since 2005 I have been exploring a theme. The theme began as the collage of places remembered.

Eventually it emerged as a landscape of symbols, imagery for documenting singular significant events. Sometimes these events are sublime, even strangely quiet. At other times they define radical transforming moments in our lives wherein suddenly everything takes on an immense clarity. The question I asked myself was this; can one use the symbols of landscape to record our emotional and spiritual journey?

Not simply the memory of Places but the place (or landscape) of Memory. Can the employment of color and objects, set in distinct arrangements evoke a sense of wonder, anticipation, longing? Does a ray of light always represent hope or can it cast an uncertain disquieting doubt instead? A majestic mountain a distant future, or a dissolving dream? I further realized it is memory that threads our experiences together, but memory is fragile and influenced by time. It disappears altogether or, re Sun Dial VI (Hora Non Quiesco) , emerges in a reinvented version.

Throughout centuries these themes have been revisited through metaphors and archetypes. Mountain, watershed, crossroads, crux are all words or images to which metaphorical meanings may be attached. In his book Space, Time and the Beauty that causes Havoc author Arthur I. Miller describes Cezanne’s importance as being “his brave new manner of producing spatial ambiguity, which he accomplished by merging foreground and background in a way that fused planes and integrated objects and space”. The term “passage” in French was coined to define this new direction in interpreting the visual. This was a great leap but it was Picasso who freed it from its nineteenth century roots. As Miller further states “because Einstein and Picasso sought realities beyond appearances, each accomplished something entirely new”.

The discovery of relative time and the innovation of fragmenting spatial planes in painting to record the transitory nature of visual references struck me as the perfect spring boards for this quest. At the same time I wondered if the exquisite transcendent quality that was inherent in stained glass windows, could somehow be imitated in painting. Travel forward in time briefly to the present and hence begins my playful interpretation of time and space through the metaphor of the sundial. In this series of paintings, the Gnomon (meaning “one who knows”) casts or reflects shadow over the roman numeric concept of time which we continue to follow. The sundial itself precedes this convention, as does the sun the sundial and before the sun, the Creator of light and time.