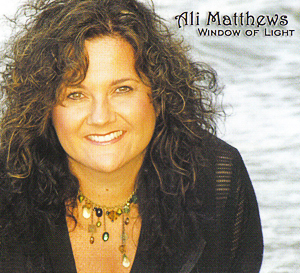 For those unfamiliar with Stratford singer Ali Matthews, Window Of Light, will be a pleasant surprise. This wellproduced CD tastefully brings together her strong, melodic voice, rich harmonies, the crisp guitar playing of her right-hand man Rick Francis, plus occasional piano, cello, mandolin, and violin – usually in a band setting. Soft rock dominates on Window Of Light, and yet you’ll hear jazz, classical, country and folk elements. “Hearts without Scars” sounds like your stereo has skipped over to a Sarah Harmer CD.

She is clearly a gospel singer, and yet writes many songs that will appeal to fans who haven’t yet embraced her faith. It isn’t until the eighth of seventeen cuts that a song (“You Knew My Name”) is obviously about her relationship with God. Gradually, lines such as “Light of the world shine upon us / Light of the world show the way” (“Hear the Rumble”) work their way into a listener’s consciousness. She seems to have won over some significant people to her corner – Jim Vallance of Bryan Adams fame, Canadian Celtic music legend Loreena McKennitt, Billboard Magazine’s Larry LeBlanc, and Christian Rock pioneer Larry Norman. Her ability to reach both those inside the kingdom, and those watching curiously over the fence, should help her reach the wide audience she deserves.